Today, on May 31st we celebrate Autonomous Vehicle Day. We would like to spread some light on the history of AVs, their development, and investment.

Not everyone knows that the first autonomous vehicle was unveiled in 1977 in Japan. A Japanese professor Sadayuki Tsugawa together with his colleagues at Tsukuba Mechanical Engineering Lab launched the first-ever autonomous car. It could achieve the speed of nearly 20 miles per hour by tracing white street markers via two vehicle-mounted cameras.

So, here we are, 55 years later talking about self-driving cars as a new normal. The world in 2022 has changed a great deal. It is full of technology, which is making our lives easier and more comfortable.

As of March 2022, the global AV market is worth $54 billion. A number of big AV companies like Tesla, Uber, Waymo, and more, are trying to grab a piece of the pie. Traditional car manufacturers, including Volvo, Ford, General Motors, Mercedes Benz, and Hyundai, have also joined the fray. As mentioned earlier, the autonomous car market is estimated to be worth $54 billion. And it is expected to increase tenfold in the next 5 to 7 years with constant investment.

More and more money has been poured into the development of AVs:

The investment numbers are growing every year. In October 2020 McKinsey & Company published a report where it showed that during 10 years (from 2010 till 2020) one-third of car investment went to autonomous-vehicle technologies.

According to their report (the chart below), the companies have poured large sums into the semiconductor cluster over the past decade. $51.5 billion invested representing nearly 50% of all autonomous investments. The next biggest cluster is ADAS components with $35.8. It makes 33% of the autonomous investments. The numbers are quite interesting and show the impact of each cluster on the development of autonomous vehicles. 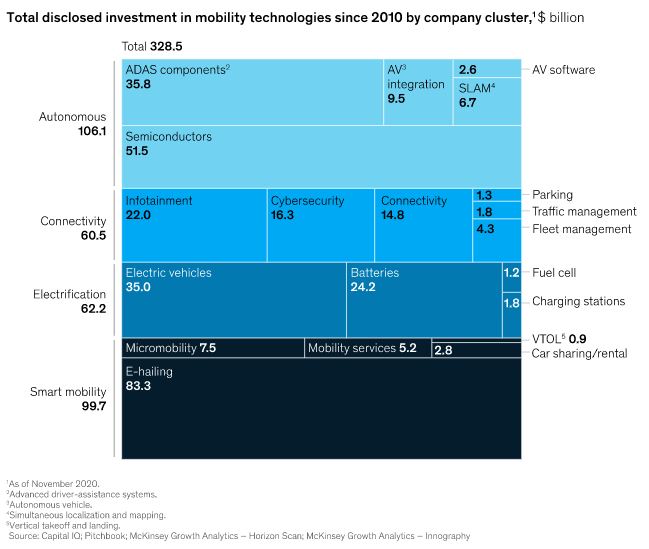 The Semiconductor cluster represents a special, and probably the most important niche in the AVs. A lot of attention is devoted to safety and security, as people are 100% dependent on the machine with all the embedded chips. That’s why ISO 26262, a Functional Safety standard, is a must-obtain in the automotive industry. Optima Design Automation, as a Functional Safety development provider, will help you meet the ISO 26262 standard. By leveraging breakthrough technology, Optima is revolutionizing automotive IC development. It provides next-generation solutions that allow engineering teams to deliver automotive ICs in a fraction of the time. Its revolutionary fault simulation delivers order-of-magnitude execution acceleration and, when coupled with its automated ASIL-C/D safety block conversion, shrinks, schedules and transforms quality.

In conclusion, just over 50 years ago, we had no idea that our future would change so much. Self-driving cars were science fiction at the time. Now, this is our reality and we should do everything possible to make this reality not just affordable but safe and secure.

Anastasiya Sasnakevich is a digital marketing specialist with over 5 years’ of international experience. Having worked in different fields, Anastasiya found herself in automotive semiconductor industry where she has been working for almost 2 years. She holds Master Degree in International Business and Economics from BFSU, Beijing, and an MBA in Digital Marketing and Business from EFAP, Paris.

Want to join the discussion?
Feel free to contribute!